“Frequently patients are suffering things very different from their medical chart. If only we could think more about it, a lot of sufferings will be avoided.” – Florence Nightingale

We present to our readers a series of short reflections realized by the students of the master scientists in the company, organised by ISTUD Foundation, arised from the phrase of Florence Nightingale. We attach also a word cloud created with the most recurring words of those reflections. 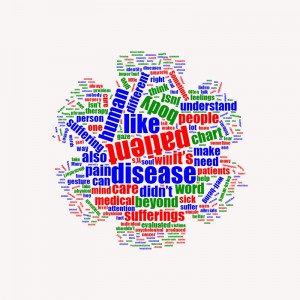 “If we listened patients with more attention we could find out that sometime pain came from the soul, not from the body.”

“We frequently didn’t consider the sick person like a human being. His identity card coincide with his medical chart. We have to give value to the needs of the patient, not only to his disease.”

“Go beyond the disease and you will find the human being!”

“Patients shouldn’t being evaluated in this way, like sick people, but simply like humans being with their living. Sometimes just a gaze or a well formulated word could erase all the negative thoughts.”

“A smile could make disappear one of the silent suffering of people.”

“They suffer = present, thought = subjunctive, they could = conditional, this make me think that there are always different shades that influence an event, give attention doesn’t cost too much but weight a lot.”

“Disease are always handling with drugs and surgery”. The communication therapy…”

“Often I feel ashamed to admit to the physician what really makes me uncomfortable because I believe that he doesn’t care.”

“Often the problem is how we live the disease, not the simple disease.”

“A word or also just a little gesture, sometime could be enough to arrive to the patient in a more human and reassuring way.”

“Words are the mirror of the human being.”

“We should listen more. Many time people need just some words.”

“Everyone need an accurate check of his well-being from the public health system.”

“A word declared in the right way could inspire a powerful placebo effect that could calm down little sufferings that are the base of big diseases.”

“Listening beyond words, watching beyond symptoms.”

“The patient is a human being with a chart number. Make the right questions and listen! We need this.”

“Sometimes the presence of a relative of a patient hospitalised could help to make beat again that part of love that sometimes get jammed!”

“Watch beyond the body. Take care not only of the body but also of the mind of the sick person/patient.”

“The well-being of a man isn’t a product that the company could quantify and sell but an act of solidarity, listening and respect.”

“Understand that someone can wear our boots and figure out our feelings, make us more secure and serene.”

“Patients suffer also of different thing from the ones that are in the medical chart; there are maybe other sufferings that aren’t physical and that we could understand better talking with patients.”

“The first and biggest pain it’s the fear: therapy starts containing the fear.”

“A word, a gesture, a gaze and a hug could make more that we imagine.”

“Psychosomatisation = take care of the mind before of the body.”

“Too many time attention it’s focused upon the disease so that we didn’t see the human being.”

“The desire of a hug. It’s what he desired every night. His need, between so many necessities.”

“The uniqueness of any subject creates individual demands, different from a patient to another and not standardisable in protocols.”

“I agree in part with the phrase. The medical chart defines the disease of the patient. It’s a fact. The sufferings of a patients could be alleviated by let him talk.”

“It’s painful being evaluated like cases and not like human beings with feelings. Take care of the sufferings of the soul with the ones of the body.”

“Nothing it’s more evident of what we omit.”

“Know, interpret and know how relate! Then, according with what I’ve read in the patient, I take a decision, a therapy, a cure!”

“The patient shouldn’t be evaluated just like a sick person, but also like a human being with rights, to keep an high identity on the psychological and social level of the individual.”

“Patient suffer the sum of two sufferings, he didn’t know one of them, isn’t informed, the other one it’s hidden in his feelings.”

“Many times a gesture, a gaze, a word could help and alleviate a pain.”

“We can see the well-being of a person not only in the care of the body but also of the mind.”

“The humanisation of cares and the proximity to the patient are necessary conditions.”

“In the word human-being there are more meanings. There is a body, a mind, a soul. So, when we talk about the care of a person we have to think about three different level and not only one of them.”

“We are suffering for a pain, because we felt victims of an unfair disease… but we are suffering also when nobody explain us, nobody help us to fight to didn’t felt anymore like victims, but rulers of the disease.”

“The phrase makes us think about people with cancer, or anyway to people afflicted by serious diseases, with an important psychological implication.”

“The patient, a complete human-being, knows himself and his body more than anyone else. We just need to give an active listening and space to express.”

“If only they watched beyond, they could understand that the most important problem will be to lose his beautiful curly hair – child of 7 years old, before the surgery.”

“I feel your discomfort, I understand it, we can re-model it and alleviate it.”

“Sometimes it’s better ask to a patient a simple How you doing, rather than read it in a medical chart.”

“Change of trend: dive in the deep and after watch the surface.”

“With a pill you can try to cure the cancer, but surely you won’t cure the discomfort that that has produced.”

“The physician should have an attitude less distant and cynical, making the right questions to the patient, so that he will have more confidence and he will open himself more easily.”

“Withour pain, there isn’t happiness, understand this fact means understand the essence of life. So the pain it’s real, the suffering it’s optional.”

“The sufferance produced by a disease goes s lot beyond physical illness.”