The language of music, interview with June Boyce-Tillman 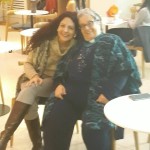 Music is known to produce wellbeing in our bodies and minds, and maybe souls, if they exist. In this book, the languages of care, attention is given not only to words, but also to voices, gestures, spaces, flavours, landscapes, sound and music. It is well established all over scientific journals that music produces endorphins in the brain. They are the internal opioids which give us a feeling of excitement. They act somehow on the same receptors as those of analgesic drugs, and have the same effect of gymnastic, meditation and sex. They ease pain and stabilize the immune system, and contain stress.  Music can help in performing with sports, as shown by the fact that turning up your tunes can also up the effort you exert during exercise. For pace-based exercises like running, music can help regulate  the rhythm and signal to the brain when the body should move. This signal helps us to use our energy more efficiently, so we’re not exhausting ourselves too soon.

However, if music produces a surplus of wellbeing when somebody is already fit, it is for us more important to know that music modulates and enhances wellbeing in ill minds, bodies and souls.

To discuss Therapy with Music, I had the pleasure to interview Prof. June Boyce-Tillman, theologian and expert in the use of music with the vulnerable.

Is music applicable to a care setting?

Prof. JBT: Yes, we can bring it in the hospitals, but we need to tailor the music appropriately. Music can play an important part in care settings. However, the most difficult aspect is that one has to understand the kind of music that works for a specific patient. Music is not like standard pills, like a pharmaceutical product. For some people their chosen style is pop, for others, jazz; for some it will be Western classical music. Music plays an important part of human care: However, some care institutions are equipped with sound systems that supposedly cater for all patients. This does not respect the personal tastes of the people being cared for.   These need to be respected; otherwise some patients will be harmed by music that they cannot relate to.

It is very important to know when a person first heard a particular piece of music. I remember one woman with whom I was working, who liked calming Baroque music. I played her Bach’s famous Air on a G String. She became pale and screamed.  It was the piece of music that was playing when she was abused.  This is remarkable when most people would associate this piece with calm and tranquillity.

This is stunning: so how can a care provider choose appropriate music inside a care-setting?

Prof. JBT: Music will revive memories and certain pieces will have explicit meaning locked onto them by significant events in their lives as in the story above. This is explicit meaning and it overrides the implicit meaning in the music itself, which may be calming if soft and slow or exciting if loud and fast.

It is suggested that when people are diagnosed with dementia they should prepare a list of their 50 favourite songs.  These will reassure them of their identity when the memory loss progresses.  This list will also help in choosing what to sing when a person is dying.  Music causes a relaxation of the tensions and can enable people to relax enough to die. The Egyptians thought that music was a boat that carried the soul away.

The liking or disliking music depends on the openness of the people who listen. Some people become more and more conservative as they get older. However, I think it is never too late to open up to a new kind of music and this process helps to broaden the consciousness.  It opens up different parts of the personality.

To investigate which music might be particularly meaningful for a certain person, we have to look at the narrative of the biography of this patient. A compass for orienteering might be given by knowing which music was listened to by this person between the ages of 15 and 30. It is the age in which musical tastes are formed, often linked with strong and vivid memories. This can also be related to social class. Opera, for example, is often thought to for rich people, although now it is disseminated widely by broadcasting and streaming.

These favourite songs may also be sung when a person is dying, by choirs called Threshold Choirs or by family members: I had a friend, who was already in comatose state, in a hospice where she was dying. In preparing for her funeral, she had given to me the list of the music she wanted to be used. All the family was there, at the time of dying: and the family did not know what to do as she had criticised them earlier for talking too much. I suggested we sang these songs. It was a breath-taking moment, for everybody – a really meaningful ritual.

Other musical practices in care contexts are bringing in instrumental groups and choirs to perform. Sometimes the patients can be included in these, along with their family members or care-givers. These sometimes involve bringing younger people into the care contexts and bridging the gaps between generations.

Is there a universal sound that makes us feel better?

Prof. JBT. This varies from culture to culture.  Some would see the OM as a basic sound of the universe. All meditation systems use particular sounds depending on the religion in which they are situated. Often these involve various vowel sounds in beautiful shapes, such as the Christian Hallelujah.

In there a religious or spiritual music which can help in moments of illness?

Prof. JBT. For the older generation in the UK, hymns may have particular meaning.  This will change in the next generation, brought up in a more secular age.  There is a raft of songs developing that are broadly life-affirming – looking at nature, the cycle of life, building community and friendship.  These are new narratives of healing.

What is the difference between the Therapeutic use of music (your approach) and Music therapy?

Prof. JBT. Music has been used therapeutically for much of human history.  Music therapy has its roots, back in the 1960s, when the therapeutic use of music was professionalised, in line with other developments of psychotherapy.  It followed a particular practice, which was based on improvisation on the piano; this was to relate to the client’s improvisation. The relationship is to be established through music (rather than the words of talking psychotherapy). The qualification involves a course in the areas of music and psychotherapy and also supervised practice. It costs a great deal, because the trainee therapist needs also to be in therapy themselves, alongside the lectures and the clinical supervision.  Music therapists practise privately or within the National Health Service (NHS).   People who use music therapeutically are sometimes paid but sometimes practise voluntarily.  They have musical skills but not necessarily formal qualification in psychotherapy.

The use of music therapists in the NHS gradually increased from the 1970s onwards but recently there has been a move towards the meditative practice of mindfulness; this has sometimes replaced the arts therapies in general. In my opinion, this limits the therapeutic techniques available.  Mindfulness with its concentration on thoughts in the ‘here and now’ is beneficial to some patients, but can be less beneficial, when someone has lots of unhelpful thoughts. Music therapy with its concentration on expression, freedom and belonging may be more appropriate for some situations.

How do you envision the integration of narrative medicine and the music?

Prof. JBT, I think that the collection of narratives, especially using the Natural Semantic Metalanguage, is a wonderful way into a person’s life. It would help to find out about a person’s musical taste and also lead to the expression for their feelings and life experiences in music.  Musical expression is a form of autobiography. It would be very good to collect narratives which reveal how people use music therapeutically in their lives.  They would add a great deal to our understanding of what energises people and brings them healing.