Thanks to Umberto Veronesi: a revolutionary of contemporary medicine 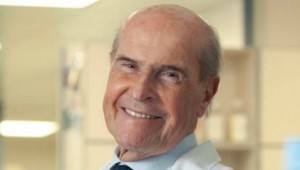 Professor Umberto Veronesi will be remembered with gratitude for the immense contribution given to the development of cancer cure, particularly for giving new life and and well-being
to women afflicted by breast cancer, through the creation of a revolutionary surgical intervention, absolutely more focused and conservative  than mastectomy – the removal of the entire breast – and for his numerous battles for health, like the fight against smoking and the education for a correct nutrition.
However,  there are other “campaigns” for which we have to be grateful to prof. Veronesi that maybe are more hidden and less known: a main one consisted in his pressure  so that  Italy adopted the “informed consent” by patients. Here, the alterity and the respect of patient, fundamental attitudes for prof. Veronesi,  are crossed by the end of ignorance of the ill person regarding his/her life conditions – the severity of cancer, the risks connected to a procedure, the life time left to spend.  In this way,  he  very same patient  can decide, helped by health professionals,  what to do and how to spend the residual time of life. A clear invitation to dismiss that paternalistic approach was elicitated by prof. Umberto Veronesi, through the informed consent – I don’t tell you the truth because you are not able to manage it –  and this is connected with the  “white lies”, those lies that often are allowed because they are trues hidden for a good cause.
In the respect for the patient who is facing the fact that his/her body betrayed him, developing a cancer, Veronesi insisted about the transparency  of information, as long as it will not turn into brutality. The patient must be free to choose the way to take care of himself /herself and so h/she needs the necessary information related to the  medical pathways. The “living willingness” are a consequence of hos huge respect of the patient’s opinion, that Veronesi promoted like an evolution of  the human being in the society: the right to choose, once reached the “end of life”, our treatments up to a terminal sedation – that he properly called Euthanasia. And also the fight against suffering, and therefore the logic introduction of pain therapy as a must, for the care of oncological patients. The IEO _ Istituto Europeo di Oncologia was planned by architects that maintained lower floors – avoiding the classic alienating big building – bringing gardens and trees inside the walls of the hospital structure, following the Feng Shui, an oriental phylospphy that cure relations between living space, nature and human-being; Veronesi was convinced that the “beauty” was also a fundamental  factor for the healing.
However the real  Copernican revolution was carried out by him in his specialty, oncology, when in the end of 90’s the “Di Bella’s Therapy Affaire” blew up. The professor, instead of “yelling to the plague spreader” like the majority of Italian oncologists, asked himself “Why so many patients refer to him?”, highlighting in the physician Di Bella that human and kind characteristics that Oncology was losing. Prof. Veronesi found out that in  Di Bella’ practice the patient was still owner of  his/her name and  didn’t turn into a hospital record number.  Veronesi until the end believed in the necessity, or better in the duty of the physiciana to be “clear” and “kind” – today we could say – “human with patients”.

And talking easily, without hiding behind “Mediquise”- the medical language”. Never repudiating the oncological guidelines and the value of research against cancer, that in any case were often able to turn cancers from fatal diseases into chronic conditions, we remember one of his last editorial on the Corriere della Sera in September 2016. Here Veronesi was commenting the choice of two young Italian women – one aged 17 year old who died at 21 and one of 34 years old also dead – who refused chemotherapy and referred to the Hamer’s method. Even in this case, he avoided the direct conflict with the German physician and the new German medicine, but he cherished rather a placid dialogue, with his usual self-criticism.   Once more,  there was a call for action to the oncologists to be in communicating with patients so that they will truly choose watching not only the today of chemotherapy, but also the broaden horizon of tomorrow.
With gratitude we remember his teachings, continuing his struggle for humanisation of care through narrative medicine, that is based exactly on a relational meaning and feeling between caregiver and patient.
Maria Giulia Marini and Health and Well-being Area