Impulsive-compulsive writing on Social Networks versus reflective-effective handwriting: a proposal to collect narratives in healthcare 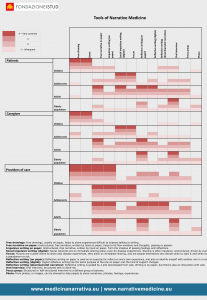 In Social Networks – as Facebook, Twitter, and some “new advanced apps” – compulsive venting covers every topic: love, politics, work, and disease – a compulsive trigger to complain about what “is not” working. This can be very dangerous, dealing with healthcare: names of physicians, carers, and institutions are blamed, without any possibility to check whether this blame is worth or not. Researchers from University of California, San Diego, Yale, and Facebook Inc., have found that the feelings vented on Facebook can be contagious, as it emerged from an analysis carried out on Facebook, from January 2009 through March 2012, in the top 100 most populous cities in the U.S.

When we use Social Networks, we must be prepared to be overwhelmed by tangles of complains and tons of egocentric selfies seeking to be acknowledged. Without any moral judgement, this unavoidable and unstoppable use of Social Networks, a part of the technological progress, might have as outcome physical loneliness and isolation.

How much do we reflect before posting our short narratives on web? How long do we concentrate and pay attention? Is it just a compulsive and narcissist act, which is born from the urge to get immediately a “I like” or an angry venting?

Daniel Goleman, in his last book “Focus”, studies the Social Network system and tries to understand which part of the brain is activated by these tools and if any subsequent potential gratification occurs. It is the “paleo-brain”, which includes the amygdala, the centre for our basic emotions. The bottom-up brain is triggered, with a very quick reward, not the top-down brain, activated by an effort of concentration, attention, reflection up to meditation. Goleman states that the virtues of attention and concentration are getting somehow lost in our society, and therefore the virtue of empathy, including not only the ability to understand better the others, but also – enlarging this concept – the goal to achieve a better awareness on each one own self, are at risk of disappearing. The multitasking society has become a true fact, but along with lack of serenity. Doing too many things together, participating with one ear to a meeting while the visual and somato-motorial part of the brain is involved in reacting to a trigger on Facebook, does not allow to reach adequate performances. Balance between them is originated from the harmonic alchemy of the use of the top-down mind with the bottom-up mind.
Web can become a wonderful source of information, or a post office where sending our own feelings, narratives, lives in the cyberspace: the risk is to put more and more compulsive of our narratives on disease, becoming fast writer, superficial thinker, up to use a very poor and standardized emoticon language.
Pros and the cons on disease and health narratives of Social Networks should be considered before concluding prematurely that social network are “evil”. The pros are an opening community, the mass citizenship effect, the raising of a global movement that can fight for the right to get, as it occurred for getting pain therapy, reimbursed therapies, and information on second position. The cons might be the thin thinking behind, the venting and blaming of good practitioners, the chains of contagious negative feelings, the sellers of remedies that do not work. 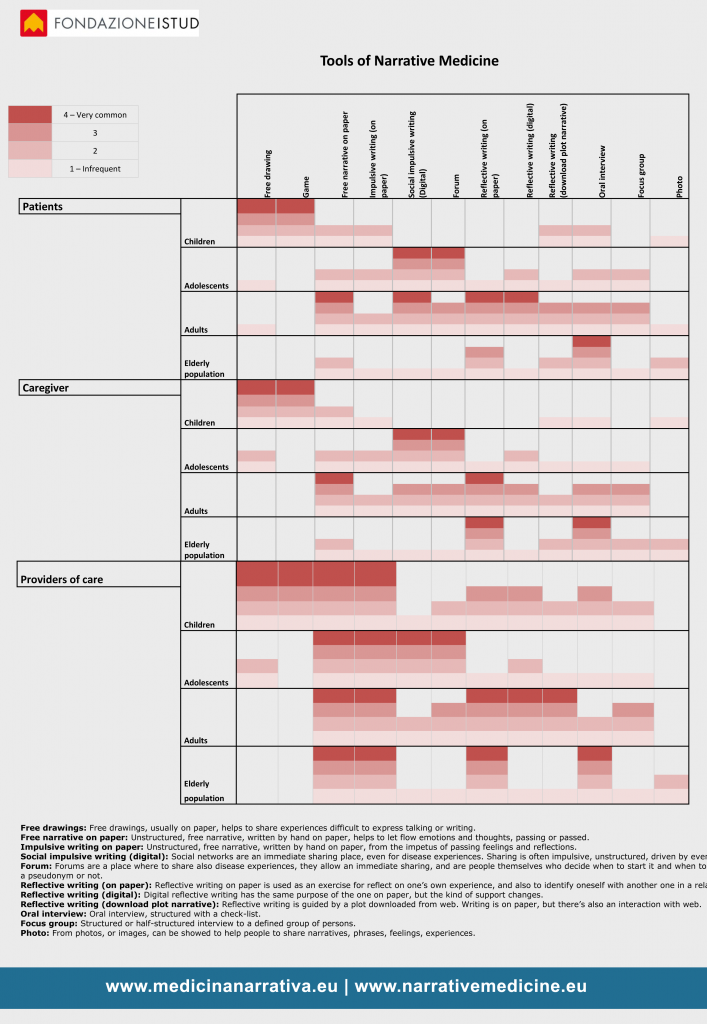 In the enclosed table, a proposal is provided on how collecting narratives about their health and illness for the different ages of the people. We should distinguish between two possible factors: easiness to reach people and effectiveness and quality of their narratives. If we are considering young people, it sounds out very clear that the fastest way to reach them, about their health telling, is the web. The same holds true for the adults, who wants to express their thoughts, feelings and actions on the web. Here, researchers are fascinated by the efficiency of the power of reaching the desired amount of narratives: not only one simple story, but up to hundreds easily collected by the web. However, if we wish to go deeper, to better scan how patients live with their disease, which are their beliefs and emotions, in a less contaminated environment, paper and pen still remain the preferred tools. Digital should be left out in this phase. Reflection from providers of care, patients and their caregivers is achieved by using a free or guided narrative, an open diary. At least, while writing each own narrative, or telling in an interview each own story, the suggestion is to leave internet out. Later one could post it, but later, when the tough emotions related to venting and get a quick “I like” are less strong.
Patients’ associations, physicians and nurses have a fundamental role in offering to patient the beauty of writing by hands their pathways of care, or their living with the disease. Here, I use a strong word – “beauty” – because handwriting might be really an aesthetic experience. After writing, people feel better: they have activated their top-down brain, they have put attention on their writing, the hard feelings vanished thanks to the pressure of the pen on the white paper, and eventually awareness, with a deeper view of their present situation, and a possible imagination for the future has risen. The act of writing seems lonely, whereas in reality opens an inner dialogue with hidden part of oneself. If we want to improve the health care system – or to preserve it – and to understand patients more globally, let us reach them not only through the superficial venting on line, but offline, in a quite area. In their narratives, also bright gems of positive strategy of coping are there to be discovered.