RESTORING THE BALANCE FOR NATIVE AMERICANS: THEIR CONSIDERATIONS ON HEALTH AND ILLNESS

On Friday, October 5, at Harvard University, Department of Anthropology, I had the great luck to attend a seminar organized by Professor Byron Good together with Professor Gone, on the therapies for the current Native American people – the word Native indicates the populations who lived those lands before to the arrival of settlers, both from North and South America. In particular, the seminar was focused on the natives of North America who, as a possible consequence to child abuse, are currently addicted to alcohol. They are currently hosted in centres called “Healing Centers”. These settings have nothing to do with the treatment of mental illnesses and the use of drugs. Native Americans are cared for by counsellors who are also Native American and who, in addition to English, also speak their language.

The meaning of the treatment process is that they can find existential transformations that connect the imperfect self to a higher purpose in their lives, and also to recover their post-colonial identity. The trauma, as conceived here, is not only experienced on an individual level, but the wound is historical, and concerns a destroyed and annihilated population.

As healing methods, in addition to the group listening therapy carried out by counsellors, the methods adopted are based on rituals that come from their origins, such as the ceremony of the pipe, smuggling, burning particular essences, with which to mark or rather to make a circle on the ground. Why the circle? Because for the natives, health is a balance of the sphere that is the earth with its cardinal points: the West, where we have the body, and therefore also the status of health and disease of our organs, which we have often inherited from our ancestors (therefore Native Americans implied the concept of genetics without knowing it), to the East, the spirituality that means interconnection with others, animals, plants, nature and the universe, to the North, the logic  mind  to unravel the issues that arise in everyday life and also to  understand why one feels happy rather than sad, and in the South remains the space for the liberation of emotions, the passions which however must be understood by the rational mind. The sphere also means life of the seasons and time of nature, sphere also means having the awareness to understand which season of life you belong to. 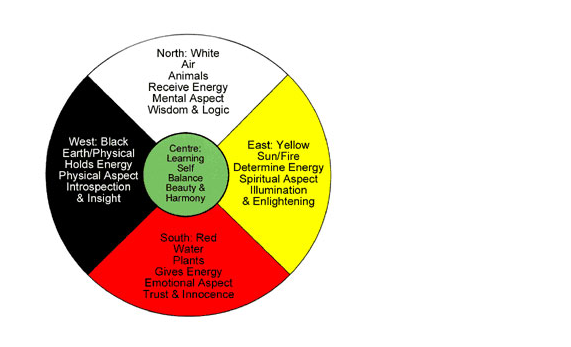 To heal means to find the balance in this topographic wheel. In this model there is the body, the mind, the spirit and the psyche and if we think about it carefully, we are analogically calling on the stage the bio-psycho-social and spiritual model. We know that everything is important: the body, the logical mind, living in nature and knowing how to manage emotions. When we talk about these things, sometimes we feel blamed of giving credit to things and values that have disappeared, burnt in the past, quackery. And yet this is not the case: at Harvard, Department of Anthropology, people listen with respect, and tries to learn from worlds other than those of evidence-based medicine. And in deed in these Healing Centers, thanks to the work of the counselors and the symbolic power of the rituals, the Native Americans have finally spoke about for the first time of the suffered traumas, have cried about what had happened and have thought about their new existential project.

The comments of those who attended the seminar were not critical, such as “How it is possible, without drugs?”, “Of what century are we talking about?”, “Do they really still believe in the power of the Great Spirit?” No, they were interested to understanding how their healing system worked, fascinated,  and seeking for a wider breath. “How did the counsellors manage the traumas once they came to light? “How many Natives remained until the end?” “How was the project funded?”. The crucial theme was the verbalization of trauma as a cathartic expression: “if you reveal that  hidden thing with your pain, this will be the beginning of your healing, but if you want to keep it inside, you will be buried, let it out” and this really helped”  This project –  named so, not a study – is an invitation to introspection of the self, the collection of forces to tell about themselves, and to turn the unsaid into whispered, declared, screamed and eventually cried. After the catharsis, here comes the lightness. All questions and comments were about operability and feasibility.

All this, I repeat at Harvard, one of the most prestigious universities in the world, where on the other side of the street you enter the realm of evidence-based medicine and advertisement for clinical trials are posted in the Tube.

In this context, we want to deepen our reflective thinking, it is as if  Native Americans had never lost the war against the settlers: we, or at least many of us, have an instinct and a tension in search of meaning of life, which today is even deeper in our hyper-technological, hyper-technocratic and consumerist-western world, where depression increases because medicine and our post-contemporary society have fragmented our body, our ego, our ties with the outside world and nature: for me that wheel with the four poles was a gift, the confirmation of the importance of the union of the body, with other existential parts and cosmos.

At Little Big Horn, the name is literally an oxymoron, the natives of America have won a single Battle and then the Colons have massacred them in the name of trade and conquest of the earth. Why Little Big Horn is so important, although for the Natives materialistically everything was stolen from them, lands, children abused, and deceived?  Perhaps because it is the emblem of the fact that through iconic characters such as Sitting Bull, Crazy Horse, it was possible to defeat the strongest, the most violent, and the most technologically advanced. For them, the Natives, the inspirers were eagles representing the connection with the Great Spirit that gives life itself along with mother earth and the awareness of being part of the universe.

At Harvard, I was struck by a sentence when these treatment centres were presented on the slides: “We do not do evidence-based medicine”. This thought arises to me: controlled clinical studies with their protocols and guidelines came only from two cardinal points, the body west, the logic and rational north.

Is it because of this that evidence-based medicine does not receive approval and is going through a crisis, as in 49% of the responses of British Doctors in a survey conducted by the British Medical Journal in 2015? Perhaps the subjectivity of the patient is missing, the South with its emotions, and also the place where one seeks one’s own existential transformation, or rather one’s own place in the cosmos, is missing, the East?

Friend, where are you?

Friend, the warriors are praying for guidance

They are fighting up north

Friend, where are you?

Friend, the warriors are praying for guidance

A final acknowledgment goes to the good power of the counsellor, the caregiver: in these centres there are neither psychiatrists, nor psychological. Counsellors who speak the same language, who use the same tools and symbols of care of the Native American, as Prof. Gone said, together with Byron Good, “here Freud is outside the door.”