As our readers might have understood, I am in favor somehow of the real patient’s narratives, because they are so colorful, so intense and vivid that they don’t need particular changes of reality to be more fascinating. For years I have struggled asking to health care providers to collect patients’ narratives and to write their narratives; however, I discovered directly “on my skin” that there are some cases in which “knowing” that some cases are fictions – just remotely inspired to true facts – is much better than working on true cases. Even, if this “true” is totally anonymous, and names of health care providers, places and patients as well, some facts – real facts, or at least perceived real by patients are so strong, that some carers refuse to face them and prefer to refugee in imagined narratives, belonging to the world of medical humanities . It is better the reading of “The death of Ivan Il’ič”, a classic of medical humanities, instead of a true narration that talks about a patient left to die alone. Both texts indeed lead to the same issue: the dignity of dying, However the Tolstoy’s pen protects us: it looks like an act of pure invention, while seeing a real letter written by a desperate and angry son to the hospital where the death of his father occurred, leads us to a difficult reality to swallow. This holds particularly true when narratives tend to be full of “moral judgement” and “criticism” to both patients and carers.

In a study using parallel chart, that is to say, free narratives of doctors of patients and their family, by pediatricians who are curing children suffering from asthma, we read not only of wonderful  doctors who are fully dedicated to children and their care givers, but we have to come to terms also to this “ironic/cynic style” of a minority of doctors: “dear whale: the patient told me she was completely invalidated in doing her daily activities. She could not walk without shortness of breath, she never went out alone”. “the mother, very glamour, high society, was super anxious… in my opinion that girl should go and live with her father”.

Short context verbatim in physician’s narratives, hopefully very few. And if these few write in this way, they probably think in this way: no one is free from judgement, everybody is contaminated by prejudice, but here strong stigma is given to our patient and caregiver “whale” and “a glamour mother”: rhetoric to say that, since these premises, these families will abandon their doctors. Beyond these, when we had used in training classes these parts  or even the whole parallel charts, some (always a minority) doctors were mutinying, defending their unknown colleagues, and remarking that at the university they study how to ask the anamnesis, and how to develop  empathy.

I proceed further: in the above mentioned letter written by an angry son who had to face his father’s death in the hospital, which took place without any relatives near the old man, the son had asked many time if he could stay that decisive night of the death, the doctor told him “everything will be okay, just go home”.  Things went unfortunately different and in the middle of the night the son received the phone call by the hospital “come, your father is getting worse”, “Is he dead?”, “I only can tell you that he worsened”. The son ran at the hospital, the father was not anymore in his bed, a nurse, not looking at him but continuing to put in order some blood samples, said to him “Do you know that your father has deceased?”. The son asked to have a formal dialogue with a doctor, however nobody came. Eventually, the personal belongings of the father were delivered to the son in a rubbish bag.

This is a narrative that we used in an anonymous way during the class training in a course entitled “taking care of the relationship of care”. The showing this case induced an earthquake. The class split in two: a part which was happy that finally these things related to poor communication and wrong setting were coming out, at the light of the sun, but another part was too scared to consider this case as happening in a real place. The latter part was saying that the son invented the whole series of facts: he was still in grief for the sudden and unexpected death of his father, and he had to find an escape goat, which was the hospital. This is a very complex situation, with no right or wrong position to be taken. However, anyhow, it has to do with the dignity of dying, and all guidelines of end life care mention the possibility to have family members ad bedside, possibly in a better and more human place. This has to do with the fact that perhaps there might be better bags (even if resources are scarce) to collect the last personal belongings of a human being. Colored, with nice messages inside.

However, all of this, the dignity of death, was hidden during the discussion by a wave of rage of how these patients and caregivers can lie and bring damage to the hospital of the health care structure.

My first reflection: doctors and nurses overreacted, because they are somehow unpleased with what they do, too scared of making possible errors, too scared of being legally persecuted. We know that 80% of doctors and nurses in Italy apply defensive medicine and are living in burn out. Not all of them, but some of them. In short, an ill health care system comes out, with discomfort, conflict, perhaps because people are overwhelmed by excessive workloads, continuous staff cuts, and struggling to have a minute more to talk about and talk to the patient.

My second reflection: if health care providers cannot stand the possible true of the words used by colleagues, patients, and caregivers, we have to use whatever works to foster empathy and relational skills (so, welcome Ivan Il’ič, the “Seven Plans” by Buzzati and “Patch Adams” with Robin Williams): use medical humanities, movies, literature, art, theater, music, whatever is able to “say something true” within the lines of untold and of the emotional manipulation of the performance. Use artifact tools.

In my experience, I became aware that sometimes “denial” is not something only acted by patients when getting bad news, but it is acted as well by their carers. Here, the world of fiction is preferred and in some cases, it is impossible to put simply things in order, as Mary Kondo (The life-changing magic of tidying up) in an oversimplifying message is trying to teach us. We all very likely, when we feel that something threatening is happening, tend to return somehow to childhood and we want to listen to nice fairy tales, where the bad wolf is far in the woods.

Perhaps, not to take refuge in the world of fairy tales, we can learn something from this Chinese ideogram, which means LISTENING: 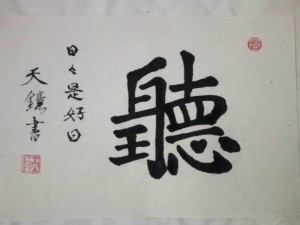 Have a careful look at the figure: on the top left part, an ear is stylized, and in the upper right area, an eye. Going down, on the right site, there is a unique line that means UNIT, or unitary attention. Below this line is clearly visible, even if dotted, a heart. By finishing the cycle, in the lower left partthere is the representation of the RE, which in other steps I found translated as Mind. I prefer to think about the King. In summary, an understanding is worth of a King (or a Queen, and we all can become it), requires observation, listening, total attention to what happens and the heart that is the seat of SHEN, the spirit. If SHEN is strong, the heart will be strong, the listening will be better and the consequent actions will be straight.

If we then strengthen our heart and know how to use eyes, ears, and concentration, we will listen to everything we will be told, even the most difficult news without seeking refugee in the fairytales.