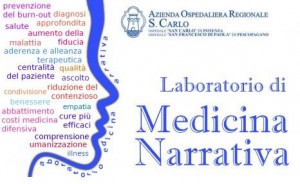 In 2013, with an approval by the General Director, was nominated a Working Group, with the aim to carry on the activities of the nascent Narrative Medicine Laboratory. The Working Group is varied, and it includes physicians, nurses, and clerks, and – to better answer to the demand of multidisciplinary required by the Laboratory itself – the support of professionals, such as cultural anthropologists. After a first training phase of the professionals, which saw the participation of some members of the Working Group to the Master in Narrative Medicine of ISTUD Foundation (Milan, Italy), and after a first conference in November 2013, has begun the real field trial, realized according to the following steps:

The research: objectives and methods.

Even with the general purpose to arrive to the integrated medical chart, for every Unit we tried to seek some specific internal objectives – such as the observation of the communication modalities of a cancer diagnosis, and their consequences on the patient’s emotional impact, or the highlighting of fidelity elements and the relationship between this and the therapeutic adherence in the case of chronic patients.

The tool we decided to use is the journal – so, the free narrative – with the aim to give patient the possibility to make his/her own story flow, without caging it in questionnaires or structured questions.

The journal and collection of stories administration phase has begun in July 2014, and has been concluded in October. The involved Units health personnel collaborated in guiding patients and in choosing an adequate setting in which explain them the project objectives; the journal, instead, was given to be written at home and then returned. This was an almost obliged choice in the Oncological Day Hospital where we met patients before the chemotherapeutic treatment, and whom limited mobility of the arm would have involved some problems in the journal in loco compilation.

We are very satisfied about the observed participation and the patients’ willingness in sharing their stories – an evident sign of the possibility to consider narrative also as a tool to go out of the isolation produced by the disease.

Today, we have about 150 stories that allow us to better know and comprehend patients’ needs. The stories, in fact, have been analyzed through Nvivo software.

In each story have been highlighted the three dimensions of disease, illness and sickness, with the emerging of the pathology from a clinical, subjective and social point of view.

Very focalized on illness were the oncological patients’ narratives, from which – among the main dimensions – is pointed out how much the communication modality of a cancer diagnosis could influence, and how much it conditions coping and the acceptance of the disease. Narratives, in fact, are divided between who showed a “narrative” communication style, tended to make patient informed on what he/she was facing, and who reported a cold and authoritative communication style. It’s true, we are speaking of few cases, but this last communication modality’s consequences could induce patient to take care out of him/her region – a damage for the patient him/herself and for the Hospital.

More centered on disease are rheumatologic patients’ narratives, among whom the 57,5% comes from regions close to Basilicata and arrives at our Hospital after having been in several centers and with several professionals present in the entire national territory. From narrative came out the motivation for which these patients decide to stop at San Carlo’s Rheumatology. Problems of non-compliance are not evidenced – an element to be linked with the relationship of trust between professional and patient, who feels not only a great expertise, but also an important human closeness. It’s an important factor, that gives value to the principle according to which the doctor-patient relationship influences on the way in which patient faces the therapeutic iter.

“My doctor helped me a lot, and thanks to him I feel good. I will never be tired to thank him, because is thanks to his … and his know how with the patient that I better faced the disease”.

Actually, after the congress of the 22th May in our Hospital, we have in the pipeline several training activities, directed to sensitize all operators about Medical Humanities, Complexity and Sustainability themes.

The steps done till today encourage us to continue a long and difficult progress, more and more in line with the Humanization principles. The wish is that the Laboratory’s research activities could interest several Units of our Hospital, with the purpose to observe, for each one, a specific dimension.