We are glad to publish the project work of Luisa Crippa, psychiatric rehabilitation technician, Serenella De Paolis, nurse, Gisella Marino, internist, who participated in the last edition of the Master in Applied Narrative Medicine of the Health and Health Area of ISTUD Foundation.


In the first months of 2020, health professionals were the protagonists of a considerable effort of care, in a context that, in some Italian regions, had the connotation of an unprecedented and collective health disaster. For the Project Work of the Master in Applied Narrative Medicine, edition 2020, we felt the need to analyze what was happening and decided to give voice to those who, in those months, worked in dramatic conditions. Therefore, Narrative Medicine supplied us with a valuable tool to approach health professionals and collect their stories. All of them – nurses, physicians, social workers – overwhelmed us with their words; each one contributed to draw a real canvas, with intense colours, full of humanity and courage. We say, together with them: “…not to forget”.

We collected 24 narratives from health professionals who took care of people with COVID-19 in those months, in the area of Bergamo, in Milan and an elderly care residency in Canton Ticino. The request for the narrative was made through a very open narrative plot: “What do I leave, and what do I keep and take with me from those days”. Only half of the invited people agreed to tell their story. Many of those who did not accept the invitation, said that going back to those days was too painful and that they were still emotionally overwhelmed.

So, reading and analyzing the stories, a journey through the memory of those who worked in the COVID-19 wards began for us.
Narratives came mainly by nurses, who linked their working experiences with their family and social lives, through a more factual and personal language, but sometimes also through symbolic expressions. The epic/military-style prevailed in the narratives, because of the many references to war, along with more tragic and dramatic style, but also, in some cases, ironic, or romantic, or dreamlike style, in the description of a dystopian reality. Elements of strong denunciation also appeared.

Despite the great suffering expressed, narratives also showed the many resources activated by the health professionals: both personal resources, such as optimism, willing to live, passion, courage, love, faith, and those related to the teamwork, such as pride for their profession, solidarity, a spirit of cohesion. These elements certainly helped them to feel less vulnerable in facing the health emergency.
More, for many health professionals living this experience stimulated a personal enrichment, a change of life perspective, a desire to start again, a newfound pleasure of being together, and the rediscovery of family affections. They let themselves be vulnerable in a perspective of personal growth. Finally, we found many elements testifying the health providers’ strong empathy and ability to enter into the hospitalized and isolated patients’ lives, sometimes taking the place of their distant family members, and listening to their stories and memories.

The stories of the health professionals who worked in those months in the COVID hospitals were full of often conflicting emotions. Of course, the emotions with negative connotations were very well represented: anguish and pain emerged, next to fear or terror, and a lot of sadness. Together with them, positive emotions were expressed (almost 50%): first of all trust and acceptance, but also joy and hope. 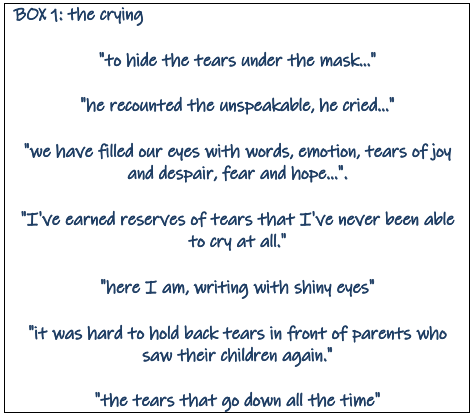 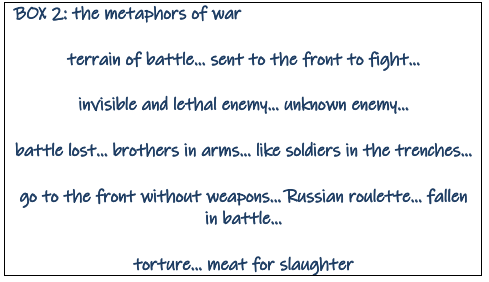 Basically, in all the narratives, we encountered a lot of metaphors, illustrating in vivid ways the memories of those days. The ‘war’ is the most present metaphor, through expressions and images that evoke, above all, the First World War or the Vietnam War (see Box 2).

Many metaphors referred to the sea, such as “staying in the same boat”, “withdrawing to a safe port”, “keeping the helm”.

More, we found many ‘dreamlike’ metaphors referring to a vision of distorted reality, where the silence and the sounds of the wards, combined with the pain, induced in the health professionals a sense of alienation: “Surreal journey…”, “catapulted into a parallel world”, “Hellish circle”, “circle of uncertainty”, “altered reality”, “but did it happen?” “continuous nightmare” “…leaves us petrified”, “journey without return”.

We still listed other beautiful metaphors that expressed hope, awareness, joy: “a second life”, “the desire to live as contagious as the virus”, “pardoned by this beast”, “tattooed in my heart”, “moments of life like postcards…”.

The 24 collected narratives showed us the scenario of strong and motivated health professionals, armed with inner strength, professionalism and humanity that day by day emerged, allowing them to overcome to this complex, painful, but a unique professional experience.

Three recurring themes, in our opinion, were particularly useful to communicate even to those who did not live this experience, what happened in those months. For this reason, we decided to let them speak. 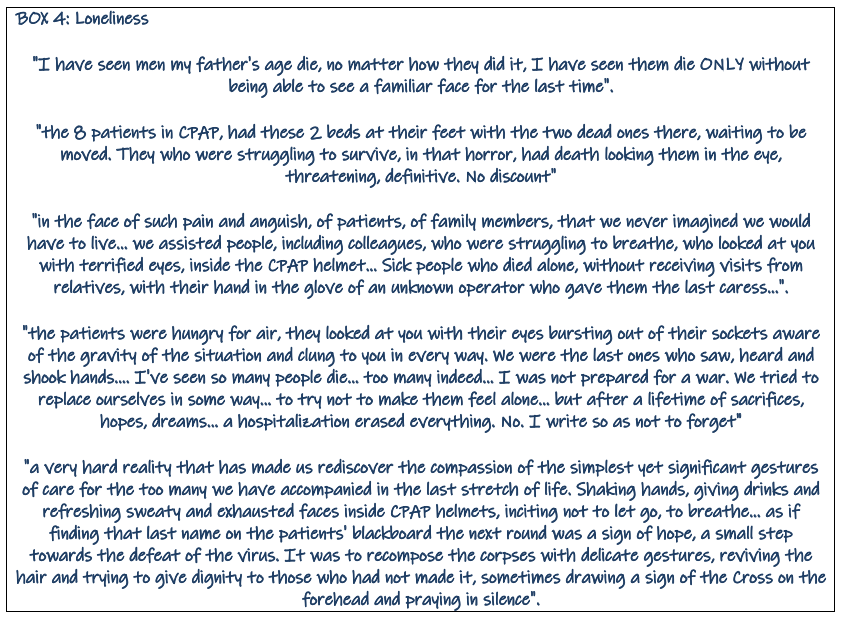 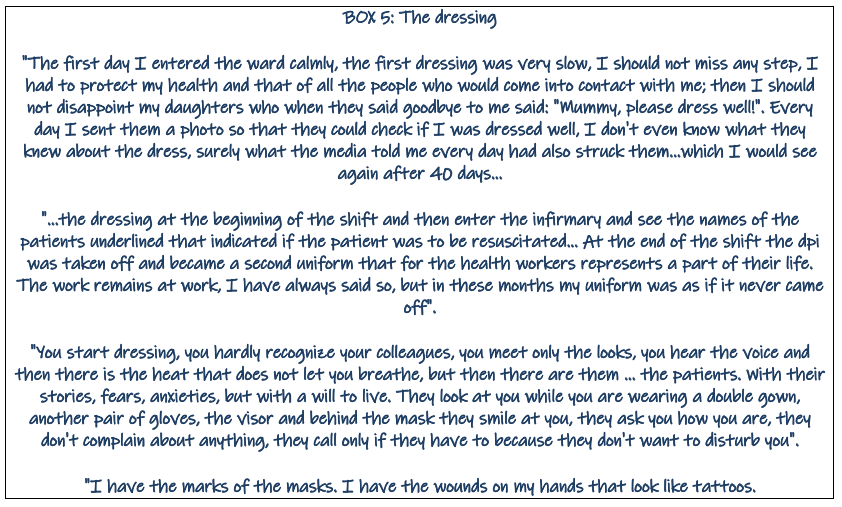 The Narrative Medicine tools gave us the possibility to read and give voice to a complex professional experience. We wish the memory of those months could be useful to redesign better services of care, with greater attention to the health professionals’ work quality.

Finally, we would like to emphasize the particularity of this edition of the Master in Applied Narrative Medicine 2020 and this project work. We together designed the project, collected and analyzed narratives, without knowing each other, never meeting each other, working from distant places, through evening video phone calls, until we finally could meet each other on the occasion of the third module of the Master. It was a very enriching experience, marked by an unexpected harmony. The result was a friendship lived as a reciprocal gift.