When we watch a painting, or a picture, the level, duration and effect of the observation can vary. We can give a distracted and quick look, or we can choose carefully the position of the viewing, and pay attention to the details. We watch the image. Sometimes, the action stops here, but other times something happens. It can happen, for example, that a detail, or the whole image, recall us somewhere, maybe through a memory, or the imagination of a place, a situation, a story. The image starts to speak to us, and we begin an intimate dialogue with it; in the end, we watch the image, and the image watches us. This is one of the principle of art therapy, which, as well as reflecting writing, allows a process of introspection and listening to ourselves, able to start a process of expression, sharing, social inclusion, rehabilitation, wellbeing, very important for ill or fragile people.

But what are the effects of art for health care professionals? Can it become a tool of expression and wellbeing also for them? These were our questions. 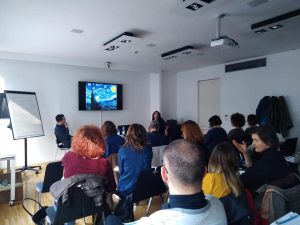 The occasion of the pleasant and intensive week with Stephen Legari, who visited some Italian health care facilities, and was our guest at the Master in Applied Narrative Medicine, allowed us to carry on together an “experiment”. We proposed to different groups of providers of care, from different contexts, to observe for some minute the picture “Starry night”, by Van Gogh; then, we invited them to freely write all that came from this observation: impressions, emotions, reflections, details. As required by art therapy – and also by the activity of close reading – neither the author’s context of life and his biography had to be taken in consideration. The participants weren’t request to reflect on Van Gogh, what he wanted to express through the picture, his biography, or his mental illness. They were invited to abstract the image from its background, and observe it for what it showed in front of their eyes, in that specific moment, focusing on the own relationship with the image.

Why the “Starry night?”. Among the many possibilities, we chose the image of a largely known artist, out of the box of his time, and for this reason his paintings can be considered as symbols of the openness to different interpretations and possibilities of gaze. It is a known painting, sometimes considered as “already seen and assumed”.
In all the contexts in which we proposed this exercise, the health care professionals expressed a first moment of surprise, and in some cases uncertainty: “Why do I have to watch an already seen image?”, “What do I have to write?”, “Do we have to give you our written texts?”. Then, silence came. The silence of the observation, of the personal dialogue of each one with “the own starry night”. Gradually, words came, flowing on the papers. These moments were very intensive, almost magical, since time stopped and became a time for oneself. 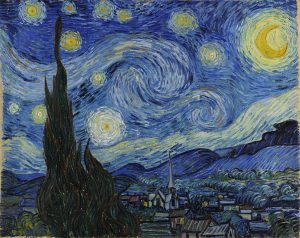 We didn’t request the participants to give us their written reflections, since they will remain the expression of an intimate moment; but we invited them to freely and voluntarily tell their experience of observation. The great willing to share was the first signal that something happened to them. Within the different sights and tastes, the overall perceptions from the Starry night revealed a strong contrast of emotions, connected to the graphic division of the painting, composed of a dynamic higher section, the starry sky, and a static lower part, with the houses; there is also a dark side, represented by the big pine standing out toward the sky. Each of these elements recalled different or uniformed perceptions. Who focused on the houses, usually felt serenity, peace, the warmth of a night in a sleeping town. On the other side, the sky, with its “stellar vortexes”, raised different reactions: somebody from this movement perceived apprehension and anguish; others found in the light cheerfulness, color, till the sensation to be cradled from the circles of the sky, often related to the waves of the sea. The pine, between the sky and the town, generally was seen as a threatening and pressing figure, because of the dark color, but also for the shape, in several cases compared to the hellfire. Some providers of care reported to have perceived the dynamism in the own body, feeling “moved” in the different parts of the image. Others focused on a specific side of the picture and the evoked perception, the serenity of the houses, or threat of the pine, or the light of the stars.

For several health care professionals, it was difficult to separate the painting from Van Gogh and his tormented story, and they tended to limit their observation to a descriptive level, especially at the beginning of the exercise. The stimulus to enter into the picture and choose a place, was helpful for them to let direct emotions go, without the mediation of the knowledge: who entered inside the houses, who in the church, others went to the hill to watch the starry sky. In the end, many of them were able to feel the evoked emotions: “the picture blended things inside me, my state of mind came out”, “I felt an imminent threat, and I was scared”. Others connected the image to own memories or current experiences: “I saw serenity, light, guidance in a still without destination way”; “blue is the only color that I never see, so I like it”, “blue recalls me the sea”. Many languages and styles were used, from the metaphorical to the didactic.
Although the contrast of perceptions emerged from all the groups and professions, differences in the overall climate were found among the contexts: in some situations, positivity and serenity prevailed, in others anguish, apprehension, till pain were expressed more frequently. In these cases, we had the impression to receive a request for help, and that this exercise represented a rare opportunity of deep communication, comprehension and expressions of feelings related to events, maybe lived together, but still not shared and welcome.

It was clear how arts represented for the health care professionals the mean to let their emotions go out, through the mirroring into the image. Each one brought the own starry night, and the groups painted a new choral and unique starry night. Probably nobody will exhibit this picture in a museum, but it could be exposed inside the walls of the health care facilities, as precious map to reach all the providers of care’ wellbeing.