Metaphors are a structure deeply rooted in our society, and which is not relegated only to the reigns of poetry and literature, but also to the global collective heritage. Despite resistance in the health sector, science-dissemination and documentary companies have for many years already understood the effectiveness of the rhetorical tool and have introduced explanatory images into the common language, such as ‘the brain works like a computer software’, ‘the atom is like the solar system’, ‘light is a wave’; a good example is the definition of ‘selfish gene’ used to explain some of the distinctive traits of Darwin’s theory. Recently, brain areas involved in the creation and understanding of metaphors have been identified through the application of neuroscience. Although the results of this researches may seem very complex and difficult to understand even with strong scientific knowledge, we can lead back to the brain activation for the creation of metaphors ‘at the departure for a wonderful journey’, using a metaphor in turn. Indeed, Beauty et al (2017) explain very rigorously that 35 subjects between 20 and 25 years old, subjected to functional magnetic resonance during the creation of a new metaphor have created associative networks between different areas of the brain, first areas called ‘default’, then regions related to divergent thinking, also called creative-spontaneous, and finally areas of ‘executive control’. Now let’s try to represent it this way: turn on the car but not parts (activation of the default areas), begin to imagine the wonderful journey (divergent regions of thought) and finally accelerate and drive (areas of executive control) [1].

In the public imagination, two of the most important organs of our body, brain, and heart, are often associated respectively with the spheres of relationality and passion. The symbology linked to this dualism is so deeply rooted in our lives that we often forget the objective fact that it is only a metaphor, a common rhetorical figure in everyday language. Moving away from the concept that metaphors are useful only in figurative and artistic language, there are numerous studies demonstrating the value of metaphors in communication and education, so as to be defined for years as a ‘teaching device’ [2]. Indeed, they are considered both linguistic and conceptual tools, the application of which can be useful for a deeper understanding of even difficult concepts, through new and different perspectives and, consequently, also for changing the attitude of others on possible subjects of particular complexity.

It has been shown that the benefits of introducing a more ‘people-friendly’ language would fall on all actors involved in the care relationship, patients and families, and care professionals. On the one hand, the care provider could use this tool to improve the information to their patients on medical procedures, on the therapeutic regime, and on clinical knowledge related to the patient’s health condition and pathology. On the other hand, the patient would be able to better understand their own experience with the disease. It will help physicians to quickly reach a diagnosis, favorite the monitoring of the progression of the disease, and obtain a better sharing of the therapeutic plan [3]. A recent study confirms these definitions: Steen et al. (2008) identified the ‘three dimensions of the metaphor model’ in healthcare. The main function of the use of metaphors in healthcare is the ‘nominal’ one, in which the aim is to explain the definition of medical terminology (terminology level). Secondly, the ‘framing‘, when the aim is to make complex concepts, such as, for example, mechanisms of pathogenesis (language level), more thoroughly understood. Finally, ‘change of opinion’, at the level to motivate and convince to better therapeutic adherence and a better lifestyle (communicative level). 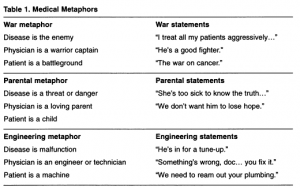 Although these characteristics make the metaphor perfect for medical-scientific communication, little attention and prejudice are still paid to this tool in Healthcare. Frequent objections to the use of metaphors in doctor-patient communication often lead to the use of an ‘inappropriate’ or ‘imprecise’ language. In particular, the issue of the ‘appropriateness’ of the metaphors to be used is still controversial in the scientific community. However, it is widely known that establishing the efficacy of symbolic language is the key factor for the acceptance and introduction of the metaphor in Health. In some cases, for example with patients suffering from Autistic Spectrum Disorder (ASD), the use of symbolic language is often not recommended as it is potentially a source of misunderstanding as autistic people “literally” consider the texts. Moreover, many Awareness campaigns on pathologies that are little known to most in their consequences, although very common in the population, such as heart failure, often point to the use of phrases such as ‘weak heart’ to define the disease, as possible sources of low awareness in patients [4].

Concerning this aspect, Narrative Medicine also suggests to the health professional a linguistic approach closer to the person and to listening with more attention. Further, their experiences of disease, activities could be implemented with the symbolic tool. Through the narrative research, metaphors alluding to the sphere of medicine, in general, have been identified in the common language. As the ISTUD Foundation has taught for years, the most recurrent metaphor cluster for illness experiences is related to the sphere of the ‘battle against illness’, while for disease they more often referred to the world of engineering, of the ‘broken machine’; finally, the doctor is often seen as a ‘caring parent’ towards the person assisted (relations sphere). The Healthcare Area projects confirm what has been found in literature, and also add interesting details to introduce a more effective language to clinical practice (FARO Project). Moreover, after the Master in Applied Narrative Medicine, participating professionals have the possibility to discover the value of this linguistic tool (‘The perception of disease through narration: stigma and metaphors‘).

Researcher at Healthcare Area of ISTUD Foundation. Master degree in Industrial Biotechnology at University of Milano-Bicocca, Post-graduate ‘Scienziati in Azienda’ at ISTUD Foundation. Expert in Medical Writing, especially in areas as the qualitative research and Narrative Medicine. She contributes to research and educational projects with the aim of improving the quality of life and quality of care of patients with chronicle or genetic diseases.