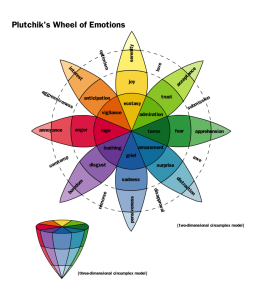 According to the wheel of emotions created by the psychologist Robert Plutchik in 1980, angry and fearful emotions are diametrically opposed to each other, as approach and avoidance responses respectively to harmful stimuli.

Plutchik’s is one of many different models suggesting the existence of certain “basic” or “primary” emotions. Such lists almost always include both fear and anger. Although basic emotion theorists tend to treat “fear” and “anger” as singular emotions, even Plutchik’s wheel includes three different intensities for each emotion – from annoyance to rage and from apprehension to terror.

The conference aims to bring humanities scholars of all periods into conversation with each other and with experts in the contemporary study of emotions, including neuroscientists, psychologists, philosophers, and linguists. The conference will include plenary sessions by distinguished invited speakers, Round Table discussion groups, and numerous panels consisting of three 20 minute papers with discussion. One or more refereed publications of essays based on proceedings are expected.