Architecture and nature as medicine

Ancient Greeks did not separate the concept of beautiful (kalos) from the concept of good (agathos): beauty implicates goodness, vice versa the individual virtue spreads charm. Ethics and aesthetics blend, and cannot be separated in the so-called kalokagathia, the ideal of the evolution of the human person.

The beauty we want to address is not only that of persons around us, but also of architectural spaces, nature, environment with which we continuously interact. In a publication on Scientific American, “How Room Design Affect your Work and Mood”, Emily Anthes reports that in 1950 Jonas Salk, award-winning doctor and biologist, was working to find a therapy for polio in a subterranean laboratory in Pittsburgh. Advances were slow, so to rest Salk decided to travel until Assisi, where he sojourned in a XIII century monastery. Suddenly Salk had opened new points of view, and among them he included the one that would have successfully brought him to the anti-polio vaccine. Salk reported that he was sure to have been inspired by his contemplative life: he believed that the architecture could have influenced so much his mind that began collaborating with the architect Louis Kahn to build the Salk Institute in La Jolla, a scientific structure that would have stimulated innovation and creativity.

Many publications in scientific literature studied the effects of spaces, colors, music in workplaces, and now several researches state that patients recover better and faster if treated in a beautiful place. After all, we are talking about a revolution: let us think to workplaces, then transformed in alienating open spaces and now in search of architectures more and more soft and integrated in the landscape. If we look at hospitals, we know that in Italy many structures were built at the end of XIX century (and these, expect of dysfunctionality, maintain a certain style), and the more unaesthetic ones date back to the 60 and 70’s wild overbuilding – the trend of monobloc. Extraterrestrial space ships as the Enterprise to admit patients in an alien place. Indoor gardens forbidden, very long corridors, white walls and aluminum window fixtures.

However, time changes, and so change narratives of spaces in healthcare places: and I want to dedicate the next words to the Meyer Children’s Hospital (Florence), a harmony between nature and architecture so beautiful to see to become a model for the whole world. Before starting to illustrate Meyer Hospital – and for who works in healthcare, a guided tour is really a quality training – I want to reflect again on the scientific discoveries that brought Salk to find how to develop a good anti-polio vaccine in an Italian monastery and not in his basement. Why do we recover faster in an aesthetically well-finished environment? Why is thinking more free?

Come into play the researches of the team of Professor Rizzolatti of the University of Parma – the one that discovered the existence of mirror neurons: a population of visual-motor neurons identified in primates, in some birds and in humans. The activation of these neurons occurs both during the execution of actions and during the observation of the same actions made by others. In the observer we can assist to a phenomenon of “neuronal mirroring” of the behavior of the observed, as if – in other words – the first did the action made by the second.

Already in 1913 Henri Poincaré, physicist, mathematician, and philosopher of science, asserted that the spatial coordinates around our bodies, and so our relationships with objects and people around us, involved the fundamental parts of our nervous system, therefore the coordination with our “outside” would be a conquest not by the individual, but by species.

What is more renown, is that mirror neurons have been localized near Broca area, and so they deal with language: researchers think that the capability to talk has evolved through information transmitted with gestural performances, and that the mirror system has been able to comprehend and codify/decode. By now is certain that this system has the potential necessary to give a comprehension mechanism of actions and for learning through imitation and simulation of other people’s behavior. In this sense, is appropriate to repeat that the recognition does not happen only on the motor level, but with the real recognition of the action, intended as a biophysical event.

However, this neuronal forest has to do not only with the importance of words, of narrated language: neuroscientists of Parma identified that, in this forest, there are some particular plants activating in the observation of other people’s behavior. If they are watered with clean water, that is positive gestures or beauty, mirror neurons activate positive behaviors. This is the relationship between neurons, beauty, arts and wellbeing. In Rizzolatti’s words: “To illuminate the relationship between mirror neurons and art, also thanks to the generous starting contribution by Japanese researchers, we did some experiments on sculpture. We took in example ancient Greek artworks, and – with an algorithm done by some engineers – we slightly modified their measures. Then, we showed them to volunteer subjects, and we looked to what was happening in their brains using the functional magnetic resonance. We demonstrated that in the human brain there is a synchrony between action and observation. First of all, real ancient Greek artworks activate the brain more than the modified ones, but the most interesting thing is that they activate the emotional area where there are mirror neurons of empathy (from the ancient Greek: to feel inside). So, the mechanisms that these Greek sculptors invented is not only the activation of the cerebral cortex and burn neural circuits letting thousands of functions start, but also the moving of emotional center: that is, the good artists succeed, in some way, in moving emotional centers with his artwork. Definitively, art reinforces the empathy of the observer, can move some imitative process, and so beauty creates other beauty”.

Ancient Greeks did know nothing about mirror neurons, but they found the golden section, that system of proportion that rules the world and we find in shell valves, ionic capitals, and in human figures, in the distance between our head and the navel, and between navel and our feet. Let us think to the Discobolus of Myron, to the Botticelli’s Venus. When we are in front of these proportions, we might calm ourselves, we feel as extraordinarily accepted by the figure we are observing: we are in empathy – sharing – with the environment. Here becomes true also Poincaré’s research.

If we always need harmony, beauty, and gentle narrated words, this becomes truer when we are sick: and let us think about sick children. If children fall ill in less illuminated schools, with walls in white monotony and neon lights, let us think about hospitals, where children and parents arrive with an only request or hope: care, possible in in the most cases, but unfortunately not always.

I let the architects speak: the concept of “therapeutic architecture”, adopted by the evidence-based design, leads the project from the entrance of the hospital, which constitutes the first stress factor of hospitalization. At 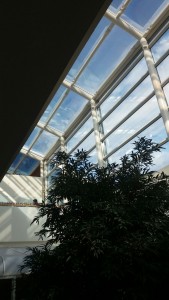 Meyer, the glass arbor that gradually leads into the hospital twists and turns in the park that, like a real care garden, contributes to the psychological wellbeing of little patients and their familiars. A comforting pathway in greenery leads to the spectacular entrance hall that constitutes a logical consequence of the planning value conferred to the contact with the surrounding Nature. In fact, the hall is an innovative “bioclimatic greenhouse that represents an excellent example of BIPV (Building Integrated Photovoltaic), which transforms sustainability in a language of materials, lights, and colors. The convergence point of the wood pillars creates a fantastic atmosphere: they are a clear reference to the woods outside, as an ideal prosecution; the arches remind the ribs of the great whale in the Pinocchio tale, of which we find references in the design of other objects and technologies connoting interiors of the hospital ward” (Anshen and Allen, San Francisco).

These the architects’ words: I let the photos I took to narrate this public hospital – and this must be highlighted – where I met extraordinary professionals, full of energy and proud: “I work at Meyer”, and such a self-realization is like a breath of spring in a healthcare system that has to strongly defense from ignorance. Beauty exists, even in a public hospital. 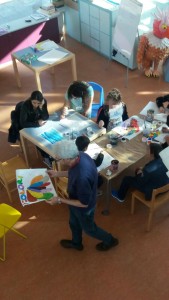 When children can stand up, they have huge spaces in the game room, in the library, in the garden where they can play: there are many volunteers – to be a volunteer at Meyer is a buttonhole – and the schools come into the hospital, so children can keep up with lessons. Visiting hours are free, without curfew. Furthermore, the last collaboration with Collodi Foundation made Meyer an extraordinarily artistic exposition on Pinocchio. Artists illustrate the narrative of one of the most known fairy tales in the world, and in corridors and wards wind sculptures, paintings, photos portraying Geppetto (the doctor or the father?), the Fairy with Turquoise Hair (the nurse or the doctor?), Mangiafuoco (the disease?); and the belly of the whales that does not scare any more, it is joyfully bright. And then growing up, and becoming a boy, but without strings – no strings, no IV, no ECG, no needles, let’s go out… “And when you will grow up, you will know”, citing the Italian songwriter Edoardo Bennato. Maybe science will not say you why, or maybe it will talk about another species of mirror neurons, but Narrative Medicine, always in search of meaning in a story we narrate to comprehend why something is happening to us – this is, Narrative Medicine will help you, and it is already doing.

For now, I know you are “an everland”, fortunately, paraphrasing Bennato again. Yes, it is a beautiful island even if suffering. A realized U-topia. 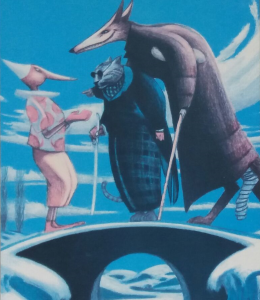 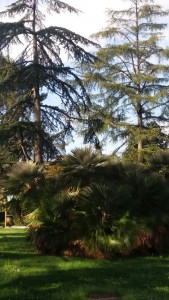 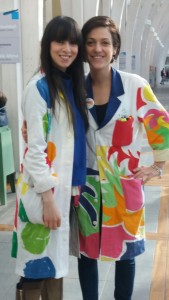 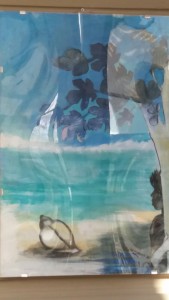 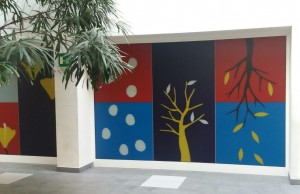