An apology of long time

“I’m sick to death of this particular self. I want another”. 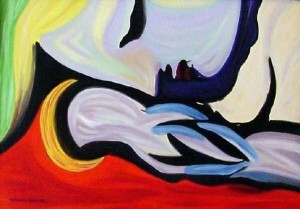 In Virginia Woolf’s “Orlando”, the protagonist passes through four hundred years to transform and to conquer his/her real “essence”. Indeed, he was born man during the realm of Elisabeth the First of England, and he will live as a free woman at the starting of 20th century. He passes through two eras, two eons – the modern era and the contemporary one – to reach his/her metamorphosis. During centuries, Lord Orlando takes off his clothes of a rigid male and full of false gender absolutisms in which “every man is…” and “every woman is…”, dictated in a life of honors of great values for others, but of no value for himself, for realizing the “other Self” desired by Woolf. Around 1610 – but this date is only a probability – the trigger factor of horror and compassion for a soldier dying next to him in war will make him fall asleep in an oriental non-lieu, to born again later as Lady Orlando. From this moment, in the following centuries, starts the struggle to affirm the “being woman” through the right of inclusion in conversation with male poets, such as Swift and Pope, who celebrates her beautifulness, but laugh at her female intelligence; or through the right of private property, from which she is excluded because she has no male heirs. The novel ends with the encounter with an adventurer come by horse and ready to leave again for non-specified ideals in the New Continent; here, in an act of extreme love with the restless cavalier, ends her metamorphosis, finally conquering freedom, autonomy, and independence.

It is clear that Orlando is the manifesto of the dual nature of Virginia Woolf, and it will not be the object of these few lines. The Orlando’s peculiarity is that in these two eras (more than four hundred years), in order to heal from life experiences continuously affecting his/her most intimate parts and deathly grieving him/her, the protagonist falls into lethargy: nowadays, we would call it as “hypersomnia”, which cannot be explained by doctors – and therefore by the rational and scientific thought. Every time Orlando – man or woman – wakes up, chooses to undertake the News. This is why the novel is extraordinary: in order to make deep and not ephemeral changes, there must be two elements, Time and Sleep.

The first element, Time, dilates in centuries, until becoming the age, the Aion – where history, as life phases, divides in centuries: for ancient Greeks, Aion is translated as the succession of historical ages, until recreate eternity. Aion is represented by an imaginary animal, with lion head on a winged human body rolled up by seven snake coils, symbolizing cosmos and its seven stellar orders transcending historicity. It is a mythological time that uses creatures even more ancient than the Greek-Roman Olympus, but harks back to the Sanskrit and Persian culture. While imagines Orlando’s immortality, alive until today even if we do not know if is Woman, Man, Androgynous, Hermaphrodite, or another human, animal, or divine possibility, conducts us to a eternally dynamic creature which continues to mutate during centuries.

Sleep – the other ingredient – represents almost a death, a rest without dreams, an oblivion, a long pause: it is equivalent with “not doing”, retreating from worldliness, becoming a cocoon to give life to a new blooming, to reach maturity. Scientific and hard-working Western world – based on efficacy – cannot understand the transformation mystery that happens precisely through retirement, assimilating also Oriental ways of thinking.

Yet I write about Narrative Medicine, and I ask you what has to do Orlando’s story with illness narratives. We can look at patients and their familiar stories, which live with diseases not only “chronic” but also “eonic”, almost eternal in their perception – a succession of eras, phases, and cycles. It is interesting to know that when Virginia Woolf started writing “Orlando” she was feeling bad, today we would say she was depressed: de facto she was facing being a woman in a society hostile with an emancipated and free feminine. Woolf cured herself during the writing of “Orlando”, last almost for a year: she prescribed herself the therapy, a four hundreds year eon, and the willingness to read her life through lethargy (from Lethes, oblivion, and Argos, inertia), that is the inactivity in the resetting of memory. The protagonist is seesawing between happiness and unhappiness for almost the entire book, and yet – through his/her experience of young love, war, poetry, politics, society, and again adult love – he/she find his/her final happiness, open to the New. Virginia was “not normal” and “sick” for the society at that time, as she was in love with the woman to which the novel is dedicated: this is the occasion for passing again through this suffering of being victim of social constrictions in the ancient world of unequal opportunities, to arrive then in the modern world loving her diversity. There are both the real time of writing and the long time necessary for metamorphosis.

Listening to “sick” people’s narratives, we see that they – exactly as Lord Orlando – want to be “normal”, at least initially, and they search for a key to be accepted by the Other: family, friends, workplace, external environment. This happens especially regarding to disabilities. Searching for Normality, yet, can be an idiot Chimera, if it becomes a useless obsession stealing time to the discovery of one’s own real essence. To love ourselves, even if sick, and the world around, we must find our own style to live with our diversity, and to make what seems “fragility” a strong point: this, according to the lecture of the “wounded storyteller” made by Arthur Frank, the Narrative Medicine referee. We cannot obtain this in efficient and pacey times. It requires honesty, long time and lethargy between attempts, as taught by Virginia.

While previously I focused on the necessity of an instantaneous and quick time (Kairos) to realize and correct patients care pathways, here I affirm the importance to live with slow and long maturation time. According to the proverb, “haste makes waste”, and Carl Gustav Jung wrote that the Soul – the undefined that defines our essential nature – has slower times than the Mind. Latins, as pragmatic spirits, conciliated both time dimensions with the paradox “Festina lente”, “Make haste slowly”. We must remember that, next to the voracity of infinitesimal time, our nature – above all, the suffering one – needs also long times. Decisions that may help us will be taken calmly, as choice we will take with who takes care of us. An exercise of juggling between velocity and slowness.